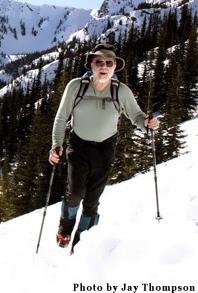 His primary focus as a college instructor was assisting his students in developing their  critical and creative thinking skills and applying these skills to the most important issues of life. He holds a Bachelor’s degree in mathematics from Central Washington University and a Masters degree in philosophy from the University of Washington.

Don is a skilled wilderness traveler and philosopher. The writings found on this website combine two of Don’s passions: a love of the wilderness and a commitment to teaching and sharing all things philosophical.

His philosophizing experience comes from teaching introductory philosophy courses at the college level for over 30 years.

He has climbed most of the major peaks in Washington State and hiked a good share of its trails.​

Mt. Rainier holds a special place in his heart. He spent five summers there as a seasonal climbing ranger and has climbed Rainier many times by several different routes, including two first ascents on the north side.

His outdoor and wilderness travel experience started in the 1950s with the Boy Scouts. During the next 20 years, his focus was on mountaineering honing his skills as a member of the “Sherpas,” a small informal climbing group. Over the past 15 years, he has been practicing the philosophies of lightweight backpacking, getting his summer base pack weight (without consumables) down into the 8-10 pound range.

In the late 1990s, Don began writing in-depth articles and essays on hiking and backpacking and other forms of wilderness travel. His writings are both practical and philosophical—in content and format. His original intent was to collect his writings and organize them into book form. The proposed book quickly grew to an unwieldy 500+ pages and 40 chapters. In 2010 Don decided to break up the many pieces of the book and make them readily available, for free, on this website. Taken as a whole, his writings provide a breadth and depth of analysis and information that cannot be found anywhere else in the hiking, backpacking and wilderness travel literature.​