Are You a Gear Addict?

I really had my act together. I had gone beyond the ultimate. I now had a 2-1/2 pound pack, 1-1/2 pound bag, and 2-1/2 pound tent. Now, there was no question, the vicious buy/sell cycle was over. There could be no further improvement. From here on out, priorities would change. Incidentally, have you heard about the new, ultralight boots that . . . .

You are only over-equipped if you never do anything.

I personally fall in the 7 to 9 pound range [base pack weight]. I don't want to sacrifice a good night sleep. If I don't sleep well, I'm not hiking well. Still, if i could get my weight down without sacrificing, I would. For me it is an obsession. Sometimes I wonder if I'm more of a shopper than a hiker (I love gear). I often find myself spending lots of time and money trying to reduce my pack weight by a few ounces all while sitting at my computer putting on extra pounds reading the latest posts and eating handfuls of gorp.

Central Issues Addressed in This Article

Those having close and intense relationships with outdoor gear are often given or take on labels like the following: gear head, gear girl, gear chic, gear guy, gear addict, gear nerd, gear glutton, gear junkie, gear slut, gear freak, gearaholic, gear expert, gadget-o-holic, state-of-the-art packer, techno-packer, technoholic, flash packer—to name most of them. The fact that there are so many labels being tossed around is interesting in its own right and suggests that many outdoor enthusiasts might have problems in this area. In this article, “gear addict” will be used as an umbrella term to cover the whole range, unless otherwise noted. Many of these terms carry negative connotations. My starting point is to be as neutral and descriptive as possible, not making personal judgments until the end of this article.

Definitions of a Gear Addict

What does the label “gear addict” actually mean? Probably the best way to define this phrase is by looking at behaviors common to those fitting these labels. As might be expected, there is a whole range of behaviors covering a wide continuum. On the milder end of the spectrum there are behaviors like the following:

On the more extreme end of the spectrum there are behaviors like the following:

Many more behaviors could be added to those above, but there should be enough to provide a relatively clear definition of a “gear addict” and to realize that there is a continuum of this personality trait. 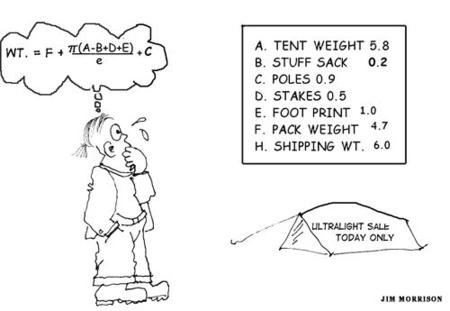 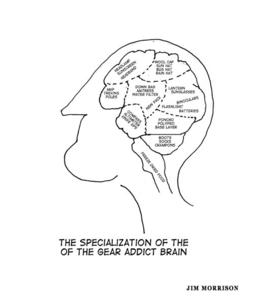 First, add any behaviors I might have missed that you think might describe yourself as a gear addict. Second, go back and circle those behaviors that best describe you, especially from the perspective of a friend who knows you well. Third, rate yourself overall from 0-10 regarding gear addiction, with 10 being the most severely addicted ______. Fourth, evaluate yourself from 0-10 regarding your satisfaction with your relationship to outdoor gear (with “10” indicating the highest level of satisfaction and “0” indicating totally out of control) ______. In this last evaluation, consider the possibility that being highly addicted to outdoor gear is not necessarily a negative.

Author’s Evaluation of His Own Gear Addiction

I admit it. I am a gear addict. Given the behaviors listed at the top of this article, I rate my gear addiction as a 6 or 7 (out of 10). Currently, I have eleven pairs of hiking boots and trail shoes, twelve packs, six pairs of snowshoes and skis, eight tents and tarps, eight sleeping pads and mattresses, six sleeping bags and quilts, and a full dozen insulated jackets, parkas and vests. My equipment storage room currently has 15 boxes and chests of various sizes to store everything. I am not totally a lost soul. I own only four stove setups, three pairs of traction devices, three headlamps and five sets of trekking poles. Then there are my other hobbies. Fortunately, I recently sold my sailboat and got rid of several boxes of sailing gear in the process.

Even though I admit to being a gear addict, I don’t see it as a serious problem in my own life (but I have been known to be wrong in some of my self-assessments). I rate my level of gear addiction as a 6 or 7 (out of ten). I rate my level of satisfaction with my gear addiction as a 7 or 8 (with zero being totally unacceptable behavior). To give myself a fairly high satisfaction rating, I rationalize (?) my extensive hiking gear closet as follows:

The “gear addict” behaviors listed earlier are usually based in specific values and beliefs about life in general. Here are some examples:

Needs to do thorough research and analysis before making purchases

Comfort and security are important to happiness

Feeling safe and secure is a strong personal need

Place high value on the simplest, lightest and most compact

Flexibility is important; likes to have many options to deal with whatever comes up

Appreciates the history of technological advances

Believes science and technology will cure most of planet’s ills

Believes it is important to contribute to grow the national economy

When Is Gear Addiction a Negative Personality Trait?

The title of this article refers to addiction, specifically gear addiction. Some will see addiction of any kind as a negative, but is this fair and defensible?  I think not. For example, some have an addiction to unselfish behavior (like regularly giving away some of their gear to others who can not afford to purchase it). Some have an addiction to exercise. Others are obsessed with buying only organic and locally produced food; others are addicted to chocolate and ice cream. And still others to hiking and backpacking (one of my personal addictions). I maintain that addiction is not inherently bad. By itself it is neither right nor wrong, but a fact of human behavior. The degree and context of the specific addiction makes it positive or negative.

When the word “addiction” is used to describe certain behaviors, the reference is often to a person who goes to extremes, who focuses on one thing to the exclusion of most everything else. For example, the person who goes deep into debt to finance gear purchases, the person who ignores their family to focus on gear, the person who focuses on their gear to the detriment of the well-being and safety of their hiking party. These extreme behaviors are generally negative and often seen as morally wrong. I am inclined to go further and attach a psychological disorder label to these kinds of gear additions: obsessive gear disorder (OGD).

What about somewhat less extreme behaviors? For example, what about those who spend considerably more time working with gear and various gear projects than actually using it in the field? Or the person who focuses on outdoor gear so much they seldom actually get out into the backcountry (as per the introductory quote)? This person is often a procrastinator or practices self-deception. Or the person who works two or three jobs to finance their gear addiction and in doing so shortchanges their health? These kinds of behaviors are usually seen as negative and maybe even neurotic. I offer these examples to illustrate that addiction is a matter of degree: some are positive, some negative but not extreme, others are extreme and maybe morally wrong.

Is gear addiction unhealthy and morally wrong? It sure can be—depending upon the specifics and who might be hurt by such behavior. For more thoughts about the moral aspects of this topic click on this link, On the Morality of Gear Addiction.