The above information provides an overview of how the SPOT II works. The following paragraphs move into the evaluative part of this article.

I have identified four areas of potential weakness. The first contrasts public vs. private emergency communication systems. Even though SPOT obtains GPS coordinates from the highly reliable system of government satellites, for emergency communications it depends upon a private system of satellites (Globalstar) and a private emergency services company (GEOS). Globalstar has had some problems over the years (financial and technical) with its satellite phone service business. There is some evidence that Globalstar satellites are degrading faster than replacements are being launched leaving some potential holes in coverage. (But recent launches of new satellites might have overcome this problem.) To put this issue in perspective, one needs to compare the SPOT system with the government-based COSPAS/SARSAT system (a network of satellites, ground stations and rescue coordination agencies). This system has proven reliable during countless rescues on land and at sea. This already reliable government-based system is reportedly undergoing an $8 billion upgrade. Advertising for the SPOT unit claims a high degree of reliability, but these claims are difficult to verify.

A second weak link is getting a GPS fix. The SPOT II unit contains a higher quality GPS chip set than the original model, but the unit’s single antenna is optimized for transmission of messages to Globalstar satellites, not for the GPS function. The SPOT company claims a high degree of detection of GPS coordinates because its units communicate only with the moving LEOSAR satellites that are closer to the Earth. One positive is that even if SPOT cannot acquire its location from the GPS network, it will still attempt to send a distress signal—without a location—to the Emergency Response Center.

A third potential glitch of the SPOT system is related to transmitting power, frequency and geography. A high rate of success has been reported for SPOT messages sent with a perfect view of the entire sky (e.g., high mountains, open desert and open water), when given 20 minutes to uplink and when the unit is horizontal (i.e., pointing skyward). Connections can be problematic otherwise. One potential reason for this is that the transmitting power of the SPOT is only 0.4 watts (compared to 5-6 watts for most other PLBs). Another reason is the higher frequency (1600 MHz) being used to transmit messages. Research data is limited regarding the SPOT II's rate of successfully delivering messages in the conditions likely to be encountered while hiking and backpacking in the mountains.

The Globalstar system, using one-way satellite communications for the SPOT, is responsible for a fourth possible area of weakness. Since SPOT doesn't have a Globalstar receiver for two-way communication, there is no readout indicating the specific GPS coordinates received from the government satellites that could be given to someone using a cell or satellite phone or that could be used to coordinate with a map. Nor is there any verification that a message has been successfully delivered through the Globalstar system. (The blinking LED lights on the unit will indicate, however, that a GPS fix was obtained.) If you knew the message had failed, you or someone else could climb to a higher point in hopes of more success. To be fair, this fourth area of weaknesses is also a problem with the current technologies used by other types of personal locator beacons.

The SPOT II has a relatively low initial unit cost, but yearly subscription fees are significant. The current five-year cost of the unit, with all features activated including the automatic tracking program, is roughly $900 (not including the AAA lithium battery replacements). The unit is relatively light (5 ounces with batteries). The batteries provide long life and are field replaceable. For a nominal fee the private emergency service company for this unit (GEOS) provides up to $100,000 insurance per year to cover the costs of emergency services provided when the SPOT-911 function is activated. However, there are many policy exclusions and qualifications that would make it fairly easy for GEOS to deny insurance coverage. SPOT has also partnered with other companies to provide roadside and maritime assistance (“SPOT ASSIST”) when the dedicated “Help” button is programmed for these services.

In general, the upgraded SPOT II unit holds a lot of promise. Anecdotal reports by hikers using the newer SPOT II suggest a much greater range of success than with the first generation SPOT. Also on the plus side, the four SPOT II functions not included with a standard personal locator beacon (“I’m OK” and “I Need Help” buttons, a custom message button, and the tracking option) can be invaluable. Especially useful for many is the “I’m OK” message when running late or a decision is made to stay out an extra day or two. Another plus for the SPOT is that it utilizes both public and private rescue services worldwide. In states which allow public agencies to charge for rescue services, the inexpensive rescue insurance provided by GEOS might be a deal maker.

How critical are the potential problems identified in the previous section? It depends somewhat on how the unit is being used (e.g., slot canyoneering vs. open water kayaking). The user’s expectations and priorities are also a factor in evaluating the SPOT II unit. Some find the unit quite satisfactory; others find it lacking. This article is designed to assist readers in making their own evaluations.

In summary, potential SPOT II users need to understand how this complex system works, understand its limitations and be clear on their own expectations for the operating conditions likely to be present. For more information click on this link to the company’s website: SPOT II Satellite GPS Messenger. 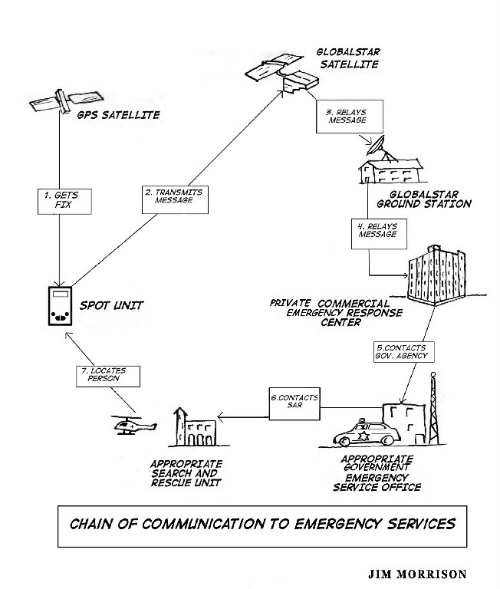 The SPOT II Messenger is popular among outdoor adventurers as a wilderness communication and tracking device. It is owned and distributed by a subsidiary of Globalstar, a communications satellite oriented company.

This article will provide an overview of how the SPOT II operates as well as an in-depth evaluation for prospective purchasers. Even though it has several functions, the purpose of this article is to evaluate how well the SPOT II operates as an emergency communication device (911 – SOS). The following overview and evaluative comments synthesize information from a variety of sources.

The SPOT unit relies on the government (public) satellite system to obtain GPS coordinates, but all of its communications involve private, commercial Globalstar satellites. Because the SPOT uses the Globalstar simplex data network, all communications from the unit are one-way. These communications involve a minimum of three different message modes: I am OK (check-in), I Need Help (from friends and family) and SOS 911 (rescue me). These three services are provided for a yearly subscription fee. For an additional fee, SPOT devices also have an automatic tracking mode (“SPOT casting”) that transmits positional information every ten minutes to the SPOT website using Google Maps for reference. All four message modes integrate a GPS fix from the government GPS satellites to provide real time and location information. Depending upon the mode being used, messages from the SPOT unit can be routed to one or more of the following:

SPOT has a network of at least 13 ground stations (“gateways”) around the globe to support the SPOT services. Each gateway is a satellite terminal which receives and sends signals to and from satellites passing in view. Spot uses “spread spectrum technology” to allow the signal to pass through multiple satellites up to three at a time and be recombined on the ground. This technology allows for  a device using lower power and gives higher reliability.

[Notes: (1) The company that produces the SPOT II unit has recently added the SPOT CONNECT unit to its lineup. This unit connects wirelessly using Bluetooth technology to several brands of smart phones. Even though this article does not attempt to evaluate the SPOT CONNECT unit directly, most of the basic information and evaluative comments in the article apply. (2) There is a device similar in operation to the SPOT called “Yellowbrick.” Instead of Globalstar, it is based on the Iridium satellite system and is designed for outdoor adventures where weight and size are not critical factors. The Yellowbrick weighs 26.5 ounces (750 grams) compared to just under five (5) ounces for the SPOT II.]

Chain of Communication to Emergency Services

With the current SPOT system, there are seven links in the communication chain: