Central Issues Addressed in This Article

One way to examine this topic is to look at the long-term emotional and psychological responses of victims and rescuers involved in traumatic emergency situations. These reactions can occur weeks, months, even years after the event. James Wilkerson, M.D. (Medicine for Mountaineering and Other Wilderness Activities, 5th edition, 2001, pages 49-64), provides an in-depth analysis of long-term responses and has suggestions for dealing with this problem, the problem now known in the psychological literature as “post-traumatic stress disorder” (PTSD).

Another way to look at this topic is to examine patterns of short-term behavior: the different ways people respond to emergencies as they are unfolding. All of us have learned patterns of behavior when confronted with emergencies. Most will be relatively consistent, but some will exhibit a different response pattern with different types of emergencies. This article will focus on short-term responses with some thumbnail sketches of common response behaviors.

Besides focusing only on short-term response patterns to emergencies, three additional starting assumptions will be useful for the purpose of this article:

Below are a dozen response patterns I consider most common. I often portray them in the extreme to make each more distinctive and easy to understand.

Serious emergencies happen to others; they won’t happen to me. Avoids confronting the fact that there is a real emergency or will try to downplay the seriousness of it. Forgets to reevaluate the first aid kit put together years ago. Procrastinates about taking that wilderness first aid course. Skims first aid and survival books, if they own any. Skims or ignores the rest of this article.

Others will take charge and know what to do if there is a serious emergency; I will stay out of the way. Hesitates to get involved for fear of being wrong; believes being passive is preferable to doing the wrong thing. Will stay out of the way making sure not to add to the difficulties already present for those who are tending to others. If given a task to do, they will often find any kind of excuse to delay doing it. This latter behavior is sometimes referred to as “passive-aggressive.”

Responds to the situation by looking out primarily for oneself, even if others have greater needs. Interprets the situation with a very limited vision of what is needed.

Always willing to criticize from a distance, always looking for the negatives. Takes a critical stance no matter what action is proposed or taken. Is usually unwilling to offer good alternatives. Is pessimistic.

Will attempt to explore all possible courses of action, even if the nature of the emergency does not allow such analysis. Uses analysis to avoid action. Often has a hard time taking charge and initiating action because there are too many options to carefully consider.

Raises questions about whatever decisions the group is leaning towards. Takes a position only for the sake of gaining increased understanding. Often argues a position that he or she does not favor to get others to fully understand the ramifications of their own position.

Will take the position of an objective, outside observer when the group is divided on how to handle the emergency. Will attempt to be a neutral third party and mediate the dispute to reach some sort of resolution or compromise. Often dislikes intensely those who use arguing and fighting as a conflict resolution tool.

Has lots of book knowledge but is short on field experience. Will sometimes propose difficult and unrealistic solutions because of their lack of experience.  Tends to go by the book and ignore the vagaries of the present situation. Dislikes ambiguity and uncertainty and tries to portray the emergency in black and white terms. Sometimes worries about lawsuits if mistakes are made.

Jumps in with lots of energy for doing something immediately, even if it is the wrong thing. Will not take the time to carefully assess the situation. Likes to be in charge and will issue orders even when not knowing what they are doing.

Quickly assesses the situation based upon past experience and relevant knowledge. Makes suggestions for group action based on that assessment. Will usually take charge if there is a group consensus on his or her suggestions. If no consensus and time is critical, will usually take charge anyway unless seriously challenged by others. Part of the intuitive aspect of leadership is to see the big picture, seeing what needs to be done on multiple aspects of the emergency.

Will diligently attempt to carry out whatever tasks are assigned. Will volunteer for the hard jobs. Will not complain if given the worst kinds of tasks. Neither apathetic nor an avoider, but does not like to take the lead.

Recorder and Debriefer: Mentally records the events to play back at a later time; sensitive observer who attempts to gather pertinent data while still fresh to forward to professional emergency responders when they arrive. Will start taking notes if the emergency involves serious injuries and goes on for a while.

Mother Hen: Tries to protect others who did not react well during the emergency.

Creative Storyteller: Embellishes what really did happen to make a better story for others.

Faith and Prayer: Prays for divine intervention. Believes our fate is totally in the hands of a higher authority.

Existentialist: Little down time, ready to move on as soon as the emergency is over. Likes to live in the now and not dwell on the past. Ready to go out and play the next day.

Which of the above types of emergency responses best fits you at the present time (both of the previous sections)? Which style(s) do you admire even though not easy? What personal behaviors would you most like to change or eliminate when dealing with serious emergencies? Which style(s) do you dislike intensely?

First, find a quiet and comfortable space and think about different emergency situations in which you have been involved (home, work, play, backcountry). Second, begin writing about your experiences, especially noting your emotional responses. The act of writing will often elicit more experiences and more responses. Third, review the many types of responses sketched above (consider adding some of your own) and circle those that fit your personality best. Fourth, assuming your past behavior is not the ideal, indicate the response pattern(s) you would like to make part of your personality.

The Willing Follower, Overanalyzer, Mediator and Devil’s Advocate best describe my past emergency response behaviors. I have some of the Ostrich in me, wanting to believe that serious emergencies happen to others and if they do, there will not be much I can do.  I admire Intuitive Leaders who have enough knowledge and experience to quickly assess most situations and come up with a good plan of action. I sometimes exhibit the characteristics of the Intuitive Leader. Over the years, I have developed more confidence and experience in dealing with emergencies and acting on them in a calm and effective manner. The response style that seems most important to develop is the Flexible Responder. Viewed as a group, the individuals I go with regularly into the backcountry exhibit the characteristics of the last two mentioned. I have a strong dislike for the Sidewalk Superintendent style. I try to look for the positive even when mistakes are being made.

2.    What response styles would I like to improve upon? Are there any that I see as negative in my behavior that I would like to totally exorcize from my personality?

3.    What is the best way to change and improve upon emergency response behaviors? Would training by outdoor survival experts schooled in the psychology of human behavior be effective?

4.    How effective is it to attach labels to these kinds of emergency response behaviors? Is it useful to label myself with terms like those used in this article?  What purpose do the labels serve? Are the identified styles too black and white (oversimplified, extreme)?

5.    Are there other ways of thinking about this subject besides short- and long-term responses by non-professionals?

6.    Should I become a trained first responder to either frontcountry or backcountry emergencies? Should I join the local search and rescue (SAR) unit?

7.    What can be learned from those behaviors to which we have a strong negative reaction? 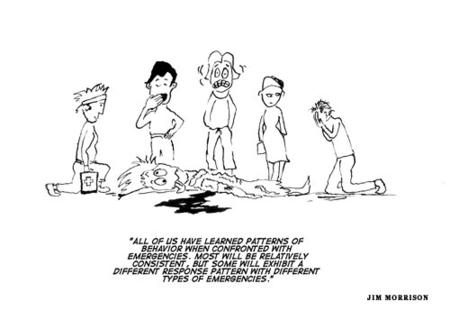