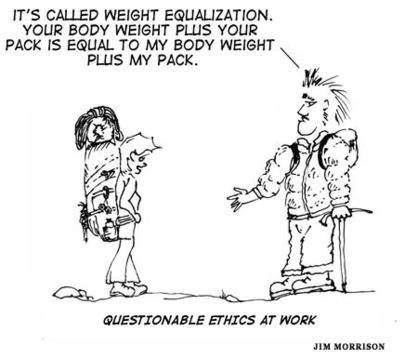 Probably the most challenging pack inequality issue is dealing with gender interactions (i.e., between same-sex members and opposite-sex members). One same-sex example is competitions between males to see who is the biggest and baddest and strongest. An opposite-sex example is when a woman goes overboard in carrying extra gear just to prove she is as strong as the male members of the party.

Following are my generalized recommendations for most gender-based pack weight situations:

Some additional interesting and difficult inequality situations (besides gender):

Assuming one accepts the principle of purposely chosen pack inequalities, in at least some of these situations, how best accomplish this? Especially, how should group leaders handle it? Doomed from the start is attempting to work out some sort of mathematical formula based on factors like body weight, body size, gender, age, etc. Even though they relatively easy to quantify, there are just too many exceptions to attempt to generalize. For example, what about those who work really hard on both their physical conditioning and at reducing their total pack weights? These factors are appropriate considerations, but difficult to quantify.

Instead of some kind of formula, consider taking a more intuitive approach whereby some members take the lead, quietly agreeing among themselves to take a larger share of the party’s gear. Arranging this inequality in a tactful and respectful manner is important. If an objection or question is raised, a simple request to carry extra gear will often suffice. In some cases, peer pressure might work if other members in the group have the same mindset about inequalities. When appropriate, clearly designated leaders should simply request transfers of gear from one hiker to another without giving much justification. A good compromise solution is for stronger hikers to take extra weight for a few days until the weight of the consumables is less and weaker hikers have a chance to round into shape.

Being in Service to Others

On a more philosophical plane, I strongly encourage adopting an ethical principle of "being in genuine service to fellow travelers," especially regarding the inequality of pack weights and especially on longer trips. This should become the rule rather than the exception. This “being of service” mentality is not common among hikers and backpackers and is easily misunderstood. This ethic will rightfully challenge common understandings in our culture regarding who carries how much in their pack.

Unfortunately, motivations in this area of pack weights are not always obvious. Who is being of service and who is simply trying to look good? Generally, we should tactfully chide others on their behavior when it is obvious they are doing it for inappropriate motivations. I fully acknowledge that these ethical positions and suggestions regarding pack weights, apart from being controversial, are sometimes difficult to implement. I present them to encourage thoughtful consideration about how to handle some of these situations of inequality.

This article tackles only one of many interesting and challenging ethical issues related to hiking and backpacking. For an in-depth analysis of 20+ such issues (plus a discussion of how ethics and etiquette apply to hiking in general), click on the following article: Wilderness Ethics—Taking the Moral High Trail.

In most hiking groups, large or small, there are often considerable variations in pack weights. When are significant variations acceptable and when are they a problem? What are the ethical implications of equal and unequal pack weights? When, if ever, should practical considerations trump the ethical (or vice versa)?

One simple solution is to self-select hiking partners so pack weight inequalities are not an issue. Another is to tailor the group's activities to fit the weakest members. Yet another is to simply ignore pack inequalities and let each member of the group handle it as they may. But these solutions are too easy and avoid some interesting discussion and analysis, which is undertaken in this article.​

I begin the body of this article by acknowledging some commonly accepted pack weight inequalities:

An example of the "keep everyone together" philosophy comes from the Olympic College (located at Bremerton, Washington, USA) “Backpacking and Survival Course” materials:

"To keep a group together, it may be necessary to shift some heavy gear from a hiker who is lagging behind to a member who is continually shooting off far ahead. Cooperation is important when traveling in a group."

Here is an example of applying this philosophy of inequalities in adventure racing:

"When I raced with a team it was normal that we had a team "ox" who had a higher SUPERMAN value than the rest of us. "Ox" could generally carry a heavier pack than everyone else and still travel the same distance in a day. [Plotting] The two distance-by-pack-weight curves, one above the other, suggested that given two team mates with the same pack, shifting weight from the weaker to the stronger person sped up the weaker person more than it slowed "Ox." It was yet another application of Newton and it worked in every team based adventure race I ever competed in."  [Roman Dial, “The Artic 1000”]